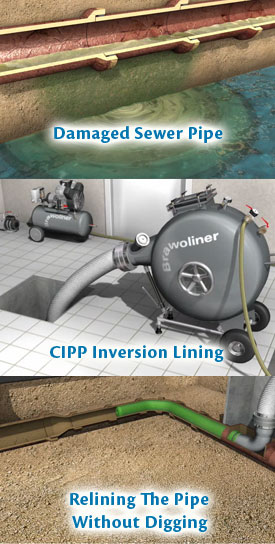 When you're running a plumbing company it's a competitive market out there.  That means that every competitive advantage is vital - and one key advantage that many plumbing contractors have is in not having to dig up landscaping or concrete to access and repair a damaged sewer line.  From the property owner's perspective it's huge because they save both the distress and the expense of the destruction of parts of their garden or driveway as well as the cost of putting them back as they were.

For the purpose of full disclosure we do help with the marketing and advertising of relining systems internationally (the Brawoliner system for example), but we work with clients that have a range of trenchless systems including both relining and pipe bursting.  (I do genuinely think the Brawoliner system is the best on the market however - if you haven't seen how it works there's a video on the trenchless relining systems site on the technology page).

From a business perspective the benefits of having that competitive advantage are obvious....as long as you have the drain and sewer calls to take advantage of them (which happily our clients normally do, since its precisely our job to get them).  What is most interesting though is the response of the general public to the technology.  Working in the world of advertising plumbing and HVAC, I'm ever-so-slightly accustomed to a glazed look on people's faces shortly after they ask anything work-related, but trenchless repairs do seem to capture the imagination with more sparkle.  It really is astonishing to most folk out there that it's even possible to repair or replace a pipe underground without digging.  Not just that, but that it's also possible to reline a pipe around multiple 90 degree bends, along different diameters of pipe, and that its even possible to patch a junction between two pipes without digging a big hole or trench to reach them.  No question it also helps to be able to show the end client the before and after of a video inspection of the line.

It's one of several interesting technologies that both plumbing and HVAC contractors are working with to help give them a competitive advantage in the markets they operate in.

If you've your own trenchless equipment that you're looking to pull leads or boost sales with, or simply if you have questions about relining, we're always interested to hear them.

We're a niche advertising agency, working to sell plumbing services and products on three continents every working day, year in year out. Email or call us to ask about our credentials and how we already helped plumbing businesses just like yours. Our job is to work to earn YOU money!
Call 1800 630 0083